Audi e-tron; what’s in a name?

Tesla kick-started the push for plug-in models, with Jaguar’s I-Pace the next to pick up the baton. Now Audi has beaten Mercedes-Benz and BMW in bringing out an electric SUV with its e-tron.

The e-tron badge, which has history with Audi’s Le Mans 24 Hour successes, has been refocused to pure-electric models. Previously it sat on the boot lids of plug-in hybrid A3 and Q7 models, but the strategy has shifted. There will be larger and smaller variations on their way in the next year or so, but Audi starts simply with the e-tron. Audi is also due to bring out a less powerful model and a sportier version.

Boasting a range of around 240 miles on a charge and the fastest recharging around, Audi’s electric challenger isn’t just here to make up numbers. 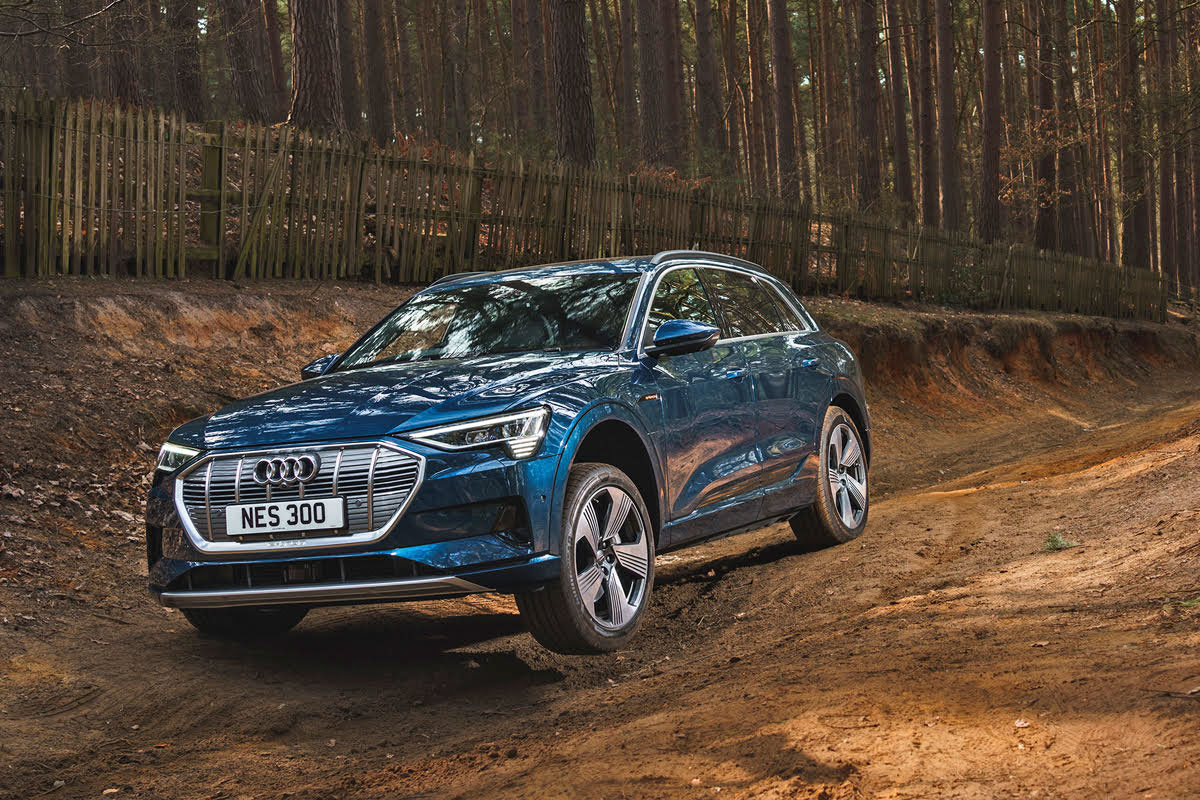 The e-tron is like a ‘normal’ Audi really. It’s a sweeping statement but compare the e-tron to the similarly-sized Q5, for example, and the electric version isn’t poles apart.

Performance is brisk, though not as fast as its electric rivals. It’s closest challenger, the Jaguar, is almost a second quicker to 62mph from zero; and you can tell. That said, a sub-six second sprint time is hardly sluggish.

Grip is excellent thanks to full-time all-wheel drive. There’s a motor on each axle, providing a combined 265 kW (360hp).

To drive, the e-tron makes its near 2.5 tonne weight felt. It’s certainly no lightweight sports car. The springs are set-up for comfort and a stable ride. It means that on all but the twistiest B-road, the e-tron performs very well. It’s most at home on motorways, but deals with most situations confidently..

What about Audi e-tron costs?

Audi’s official range figure for the e-tron is 241 miles on a charge from its 95 kWh battery. This is around 50 miles down on that available from Jaguar and Tesla, despite having 5 kW more than the I-Pace. However, Audi offers the fastest charging available in the UK.

Able to charge at 150 kW, it will top up its battery from an ultra-rapid charger in as little as 30 minutes. That’s half as fast again as the I-Pace, and will save 5-10 minutes over a Tesla.

You need to find a 150 kW+ charge point to get these speeds, but they’re being rolled out nationwide.

In real-world driving, we struggled to get close to 240-odd miles. Instead, the typical range was about 220 miles, which is still pretty good but a way behind rivals.

Prices start around the £68,000 mark and include the UK Government’s £3,500 Plug-in Car Grant. Equipment levels are very good on the standard spec model, but Launch Edition kit is excellent. It includes Audi’s ‘virtual door mirrors’ - a first in the UK.

These use rear-facing cameras in place of conventional door mirrors. Instead, a small screen on the door near the windscreen displays an image. It’s a little odd to get used to at first, but the eye adjusts eventually. Normal mirrors are much easier to use, but there are aerodynamic benefits of having small cameras fitted.

Businesses considering an Audi e-tron leases should also consider the benefit-in-kind advantages of a full EV. While the e-tron’s company car tax will be rated at 16% during 2019/20, in the 2020/21 tax year it drops to 0% and then rises to just 1% the year after.

With the combined fuel savings, that’s a significant tax booster for any company car driver wanting a premium executive SUV.

The Audi e-tron doesn’t try to tackle Jaguar in terms of driving dynamics, or Tesla when looking at range. Instead it does things its own way. It’s likely to prove a good ethos.

Customers will get a spacious and practical car, with a top-quality interior. The displays, controls, and materials on offer are up to Audi’s usual superb standards.

It might not match the headline range figures of rivals, but it really shouldn’t be overlooked. Faster charging makes a difference, and the Audi e-tron is a relaxing place in which to rack up the miles.

If you want to lease an Audi e-tron have a look at the The Green Car Audi e-tron lease deals that we have. Contact us on 01708 38 44 51 to find out more and discuss your Audi leasing requirements.